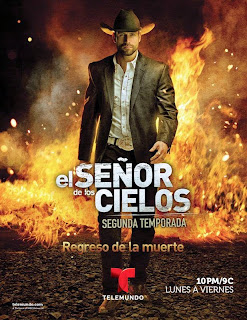 In honor of the first production in Telemundo's history to feature a second season, the network presents a series of specials offering viewers a unique experience in preparation for the premiere. On Friday, May 23, fans will have the opportunity to discover where Aurelio Casillas has been hiding in El Señor de los Cielos: El Capítulo Secreto at 10 p.m. ET/PT. The following Monday, May 26, at 7 p.m. ET/PT, Noticias Telemundo will air En La Sombra del Narco, a one-hour special about the reach of Mexican and Colombian drug cartels into US territory followed by a special two-hour program recapping the first season of El Señor de los Cielos at 8 p.m. ET/PT before the second season premiere.

In the new installment of the hit series, the compelling story of the Casillas clan offers a shocking new development: Just when everyone thought that Aurelio Casillas has died during plastic surgery to change his appearance, we discover that the death that rocked the world of Mexican drug trafficking was fake, part of Aurelio’s cold and calculating plan to wreak vengeance on those who betrayed him. He sets out to recover his family, in the United States with his second-in-command, El Turco, who betrayed Aurelio and stole his fortune. The belief that El Señor de los Cielos is gone for good causes upheaval among the rivals seeking to replace him, among them his most audacious enemy, el Chema Venegas. The climactic face-off between these two titans of evil, marked by plenty of action, intrigue and suspense, drives the plot in the second season. Aurelio finally believes that he has succeeded in consolidating his power as the capo of all capos, free to make or break deals and hearts as he chooses, when a new threat emerges from the bosom of his own family, giving a surprise twist to the story and showing that in this life, we can be forced to pay dearly for our mistakes.

The first season of El Señor de los Cielos beat at least one English-language network in ratings during its 10pm time slot on a daily basis, reaching a total of 14.7 million viewers in the 17 weeks it aired. The series’ page on the Telemundo.com website was visited by 3.3 million viewers and generated more than 35 million page views.

Produced by Telemundo Studios and filmed by Argos Televisión, the second season of El Señor de los Cielos, written by Luis Zelkowicz, is based on a true story and was filmed entirely on location in Mexico.