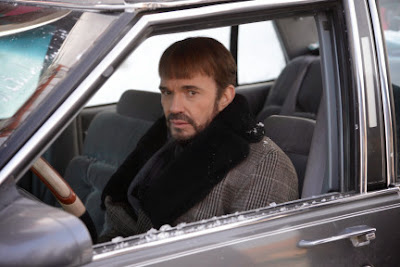 An original adaptation of the Academy Award-winning feature film, Fargo features an all-new “true crime” story and follows a new case and new characters, all entrenched in the trademark humor, murder and “Minnesota nice” that made the film an enduring classic.

Tonight's new episode, "Buridan's Ass," airs at 10 p.m. ET on FX. Malvo executes his master plan, while Lester attempts to craft one of his own. Gus and Molly team up in Duluth.

Oscar winner Billy Bob Thornton stars as “Lorne Malvo,” a rootless, manipulative man who meets and forever changes the life of small town insurance salesman “Lester Nygaard,” played by BAFTA Award winner and Emmy-nominated Martin Freeman. Colin Hanks plays Duluth Police Deputy “Gus Grimly,” a single dad who must choose between his own personal safety and his duty as a policeman when he comes face-to-face with a killer. Allison Tolman also stars as “Molly Solverson,” an ambitious Bemidji deputy.