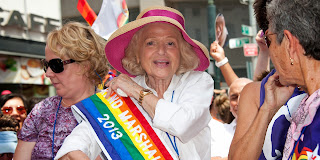 Logo TV today announced Trailblazers, a new annual event and television special to honor the pioneers who have broken new ground in the quest for LGBT civil rights and are leading the way towards equality. The one-hour special will feature the celebrities, politicians, activists and trendsetters who are transforming our cultural landscape, as well as musical performances from some of today's biggest artists.

Trailblazers will premiere on Thursday, June 26th, during the most historic week of gay rights - the 45th anniversary of the Stonewall Riots, and the one-year anniversary to the day of DOMA being overruled. As a tribute to this major civil rights landmark and all the social progress the ruling represents, Trailblazers will honor Edie Windsor and Roberta Kaplan, two of the catalysts behind that momentous achievement. The special, which will be the biggest Pride event on television, will also celebrate an entire year of "firsts" - including the first openly gay athletes competing in major professional sports.

The special will feature presenter Daniel Radcliffe, who is a longtime supporter of The Trevor Project, a performance from A Great Big World and special appearances from Jared Leto, Kylie Minogue, Ariana Grande, Rita Ora, Iggy Azalea, Tyler Glenn (Neon Trees) and Mary Lambert. Additional honorees, performers and presenters will be announced at a later date.

"Through their courage, Edie and Roberta redefined an institution to make it open to everybody. Like the greatest civil rights pioneers, they secured a basic human freedom for all of us," said Stephen Friedman, President of MTV and Logo. "Each of our honorees has stood up for LGBT equality in a way that has helped change history. Whether they're acting on the national stage or in their home towns, whether they're activists, athletes or artists, their fearlessness in confronting the obstacles of today creates a more just and equal society for tomorrow."

In addition to honoring those pioneers who have taken a stand on the national stage, Trailblazers will pay tribute to local heroes. With Hometown Trailblazers, Logo is asking people to submit the stories of the friends, family, and community leaders who have made a profound, personal difference in their lives. Five of these local leaders will be featured on the Trailblazers site, and one Hometown Trailblazer will win a trip with their submitter to the Trailblazers awards show. Starting today, people can submit the pictures and videos of the heroes who inspire them at http://bit.ly/1k2KDlJ.

Trailblazers will take place at the Cathedral of St. John the Divine, one of the first religious institutions in New York City to champion the causes of LGBT people, including the fight for marriage equality.

Edie Windsor and Roberta Kaplan are true pioneers in the LGBT Civil Rights Movement. Thanks to their tireless efforts, The United States v. Windsor has joined the ranks of America's most celebrated equality milestones, taking its rightful place alongside the Civil Rights Act of 1964 and the women's suffrage movement.

When the IRS compelled Edie Windsor to pay $363,053 in estate taxes after her wife's death - something they don't require of surviving hetero spouses - Edie stood up to fight for the entire LGBT community. Agreeing to take on the case pro-bono, Windsor's attorney Roberta Kaplan selflessly devoted four years and countless hours to the legal battles that took the case all the way to the Supreme Court. This victory allows the federal government to recognize same sex marriage and partners, and offer them equal federal benefits protection.

The historic defeat of the Defense Of Marriage Act (DOMA) stands as the single most important legal landmark for Same Sex Marriage Equality in the United States, and Kaplan's argument that same sex and straight marriages are morally equal is having a profound impact on over 1,000 other state and federal laws. Even though Kaplan's now famous Post-it served as an inspiring reminder that this was "all about Edie," their shared victory reminds us that love and equality are about all of us. Together, Edie Windsor and Roberta Kaplan have reshaped the future for LGBT couples and families, and they've forever changed the course of American history.

"It is all too easy to become cynical, to assume that it's all one big inside game and that nothing ever gets decided on the merits," said Roberta Kaplan. "I'm thrilled to be a part of Logo's Trailblazers because United States v. Windsor was in fact a landmark civil rights case that was decided on the merits. What Windsor means is that all Americans, including all gay Americans, have equal dignity that must be respected under the law."

Trailblazers will feature a performance from one of the year's biggest breakthrough acts, A Great Big World, comprised of singer/songwriter Ian Axel and Chad Vaccarino, who scored global hits with "Say Something" and "This is the New Year".

"It's been a momentous year for equality," said A Great Big World. "We're honored to be part of this inaugural celebration of the people and moments that propelled changed for the LGBT community."

Trailblazers 2014 is executive produced by Chris McCarthy, Ryan Kroft, Chris Williams for Logo TV. Joe Buoye serves as Executive in Charge for Logo TV with Amy Doyle, Wendy Plaut and Frank Ho as Executives in Charge of Talent and Music.