By Roger Newcomb May 21, 2014
* Celestin Cornielle is coming to Days of our Lives this fall. The actor recently posted on his Facebook page: "I'm currently playing a pivotal role in the story line of EJ (character played by #JamesScott" 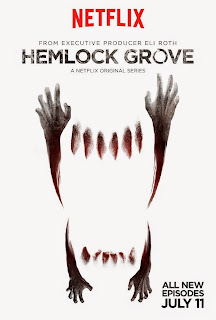 * You can now sink your teeth into the very first poster for Season 2 of the dark supernatural thriller Hemlock Grove. The show is gearing up its promotional push for Season 2, which is set to hit Netflix on July 11.

* An EastEnders regular will be left fighting for life in a major new storyline next month. (Spoiler Alert)

* Former General Hospital actress Lindsey Morgan on what she learned working on the soap: "GH taught me so much about work ethic and professionalism and endurance. 12 hour days shooting about 5 pages of dialogue is a luxury compared to 6 hours days going over 30!"

* Six contenders for the best drama actress Emmy — Claire Danes, Julianna Margulies, Keri Russell, Vera Farmiga, Sarah Paulson and Jessica Pare — talk to THR about the roles that got away, the difficulty of filming romantic scenes while seven months pregnant and the pressure of their jobs.

* Years after denying a love connection with her Glee costar Matthew Morrison, Lea Michele is finally fessing up. In her new book, "Brunette Ambition," the 27-year-old actress/singer admits she and Morrison, 35, actually did date—albeit briefly and before Glee.

Two-time Olympic champion Victoria Pendleton will appear in a special Tour de France-themed episode of ITV’s Yorkshire-based soap opera, Emmerdale, with the episode due to air on Friday 4 July – the day the 101st edition of the race begins in Leeds.

* With a print campaign to follow next month, AMC is putting up Breaking Bad Emmy consideration billboards in several locations around Los Angeles to remind voters that the now-completed show is still eligible to repeat its Best Drama series win last year.

* How did NBC finished the season at No. 1? An especially strong fall for NBC led right into the network's pricey (but profitable) coverage of the Winter Olympics in Sochi, Russia. By the time the May sweep rolled around, a NBC victory in the key demographic of adults 18-49 was long assured -- leaving the rest of the Big Four to spin what has otherwise proved to be a disappointing year.

* Law enforcement sources told the Los Angeles Times that The Shield actor Michael Jace confessed to fatally shooting his wife, April, multiple times around 8:30 p.m. Monday at their home in the 5400 block of Brynhurst Avenue.

* Amir Arison, who recurred on The Blacklist's first season as the slightly awkward and witty FBI technician, is being promoted to series regular for Season 2.

* House of Cards is casting multiple roles, including an NSA director, senators and reporters for Season 3.

* A popular webseries made in Vancouver, WA is heading to the big screen. The Weinstein Co. has offered the creators of The Haunting of Sunshine Girl, a popular web series about a 16-year-old girl living in a "haunted house" in Washington state, a deal that will create a new movie and book series.

* Former Walking Dead showrunner Glen Mazzara is developing a follow-up to the 1976 horror classic Omen for Lifetime. Titled Damien, the drama centers on the film's young boy Damien Thorn. Now an adult and haunted by his past, Damien is faced with a series of macabre events and must finally face his true destiny: he is the Antichrist.