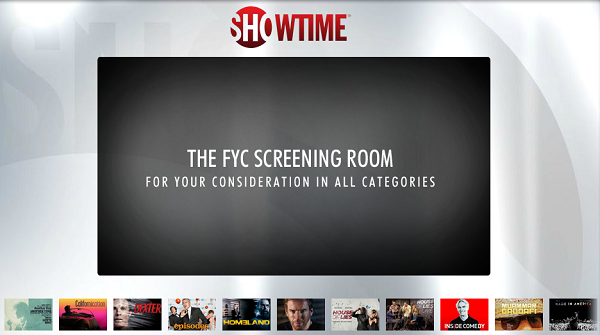 Showtime has rolled out its For Your Consideration Emmy Award campaign, this year kicking-off its annual efforts with a first-ever push that includes a fully-revamped website now available across multiple platforms, print and online ads in key trades, a major consumer media buy, and ads on over 100 buses targeting key routes in the Los Angeles Metropolitan area.

For the sixth consecutive year, Showtime will dedicate its awards site to screening all episodes of its Emmy-eligible programs on SHO.com/FYC, and this newly-designed site has magnified its reach and is now available across multiple devices including computers, iPhones and iPad tablets. Additionally, the network has dedicated Twitter (twitter.com/SHO_gold) and Facebook (facebook.com/SHOgold) feeds, all aimed at increasing awareness for the network's Emmy eligible series, documentaries, and talent. The 2014 Emmy campaign will feature dedicated ads for the network's critically-acclaimed series including Homeland, Masters of Sex and Ray Donovan. Calling attention to the category switch from drama to comedy this year, Showtime has also designed tongue-in-cheek ads for Shameless.

Showtime has been at the forefront of innovative awards campaigns as the first network to send full seasons of a series for consideration, the first network to stream its series online for Academy voters, and as the first to ever display its Emmy Award ads in an outdoor campaign on major bus routes. Academy members will receive their annual Showtime branded For Your Consideration mailer this week, which has also been redesigned and includes episodes of the network's original programming and selected documentaries.

On behalf of its critically-acclaimed and ratings record-breaking freshman series MASTERS OF SEX and Ray Donovan, the network sent our an extra four episodes of both series on DVD to Academy voters. The expanded effort of six full episodes of the first seasons of both series give voters more to sample. In addition, Showtime hosted early ATAS panels for voters in Los Angeles earlier this month that featured the full cast and creative minds behind both series.