What a week this has been for The Young and the Restless fans. Before anyone had a chance to digest the news that Gina Tognoni had been cast as a younger Phyllis Summers, David Tom had been fired from his role as Billy Abbott. Three and a half months after Tom replaced Billy Miller, the role was recast again, with Burgess Jenkins.

Y&R wanted to take the character in a different direction. If you've watched soaps as long as many viewers have, you've heard that old chestnut time and again.

David Tom played Billy as a young adult from 1999-2002, winning a Daytime Emmy Award in 2000. He was very popular in the role and his departure was a blow to the show. Ryan Brown replaced Tom as Billy from 2002-2003 but never quite caught on. The character was brought back in 2006, played by Scott Seymour, but he was let go after 3 months. In 2008, Billy Miller landed the role and, as with many soap characters played by the same actor for several years, the writers began to incorporate Miller's personality into the character. By the time Miller's departure was announced in 2013, he had won two Daytime Emmys for his work and become a favorite among fans. The Billy Abbott that David Tom returned to was a drastically different character than the one he played so brilliantly before.

Tom and Miller are different physical types with different acting styles, and Billy Abbott was now interacting with an older set of characters. The character was never in the same age bracket as his current wife, Victoria (played by David's sister Heather Tom when he was on Y&R). When Miller left at the end of January, David Tom was brought back, and I thought it was a fantastic casting choice. We were going to see an actual familiar face on a show that I don't always recognize, and it gave me a sense of hope that the new team at Y&R had some working knowledge of the past.

Y&R had Tom audition for the role he created and I understood. Billy Abbott had changed over the years and it made sense that they wanted to check him out. But I never thought that David Tom was going to be Billy Miller, and if Y&R didn't understand that, they made a huge mistake. If they didn't recognize that in the audition, what were their plans for the character? What has been accomplished in the past few months? David Tom fans are unhappy, Billy Miller still isn't coming back, and now there will be yet another new face to get used to on a show where this has become all too familiar.

If David Tom was struggling to adjust to this version of Billy, the Y&R writing team certainly was having their own troubles figuring out how to write to this Emmy winner's strengths. They didn't seem to adjust the writing for the character like a good writing team normally would do when an excellent actor is playing a role. By January 2014, Billy Abbott was much more like actor Billy Miller than the character David Tom left 12 years earlier. Tom took over in the middle of a major storyline and gave a fantastic performance right off the bat. I can't imagine another actor replacing Billy Miller in the middle of a car crash and playing those scenes any better.

Despite whatever issues existed in the minds of the producers or some fans, David Tom had great chemistry with Melissa Claire Egan (Chelsea), and he was making the material work. Just like his first run, he was fantastic opposite Jess Walton, who plays Billy's mother, Jill. The only actor he didn't have great chemistry with was Amelia Heinle, who is also playing a much different version of the character of Victoria Newman than David's sister played for so many years. It makes me wonder what the writers would do if Heather Tom returned to Y&R as Victoria. Would they try to force her to play Amelia's Victoria? Are they that out of touch with who these characters are and where they came from? 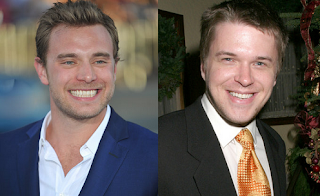 Y&R previously adjusted their writing to fit Billy Miller, as any writing staff would have done for such a terrific actor. Certainly the same could have been done for David Tom. Why wasn't he given more time to succeed? And shouldn't the writers bare more responsibility for this as well? Soon Burgess Jenkins will be on screen as the next Billy Abbott and life will move on. Will he be able to pull off a more Miller-esque style that apparently is what the show wants to see? Will he be given as little a chance at success as David Tom had this year? Time will tell.

I will miss David Tom and I'm sad about the wasted potential. But as I take stock of the current state of The Young and the Restless, I am much more concerned about the show's many lackluster storylines than David Tom's departure. But let's hope other actors aren't blamed (and fired) down the line when they are clearly the strength of the show. Perhaps Lily Winters Ashby should throw a bucket of water on the people who are the real problem at Y&R, the ones allowing this once grand show to look so cheap now, with a rotating cast, bad music and stories that change mid-stream (Mariah/Fake Cassie). Let's hope Y&R soon starts to fix what's actually broken on the show. Wouldn't it be nice if the storylines generated the same interest as the hiring and firing of the cast?

Anonymous said…
I will no longer watch this show for the terrible way they and their rotten fans have treated David. The show sucks anyway and David can do better!

Gracie's Human said…
I am just shocked! I was getting used to David Tom and thought he was doing a fine job as Billy. Those people at CBS have messes up this lovely show pretty good. I'll continue to watch with disgust.
May 26, 2014 at 4:37 PM

Unknown said…
Very well written.I couldn't agree more! I'm also disgusted with both the writers & producers of this show for how David was treated.They could have at least let him finish off this contracted role.A lot of folks said they were warming up to him in the role.He's in a good story now with Melissa trying to uncover Stitches past,and a new face playing "Billy" is gonna be distracting and pointless.I would have liked to have seen more |"old "Billy" clips in scenes with Jess Walton & peter Bergman from the shows past.This new guy Burgess will not have good chemistry with either of these actors!
June 3, 2014 at 2:30 AM

Anonymous said…
Completely and utterly shocked at this decision.I agree with Richard R that David had amazing chemistry with Peter,Jess & all the Abbotts
June 3, 2014 at 2:48 AM

Jesse Ryan said…
they hire a younger woman to play Phyllis,and an older guy to play Billy lol
June 3, 2014 at 5:40 AM

Jessica said…
They're changing Billy again,omg what is this show doing! David Tom is way cuter than this guy replacing him :(
FIRE jILL PHELPS ALREADY!!!! She has RUINED the show!!