Hallmark Channel announces that 'Happy,' The Cat will be Team Captain and Ambassador of 'Kitten Bowl,' Franchise. 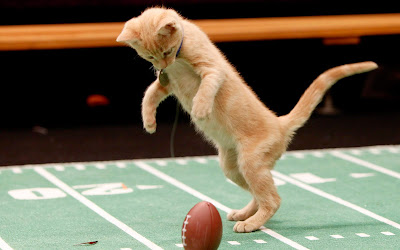 Hallmark Channel makes history as it announces the company has rescued and adopted “Happy,” the perfect feline who will debut at the network’s highly-anticipated return to the gridiron of “Kitten Bowl II,” premiering Su-purr Bowl Sunday 2015. The world’s best feline competition just got more exciting as viewers are introduced to the games’ Team Captain and ambassador: a most adorable, playful and lovable rescue cat, “Happy.”

“Happy” will not only be the face of the “Kitten Bowl” franchise, but the cat will also star in several of the network’s upcoming original movies, series and specials. “Happy” will be the first of many on-screen cat and dog rescue animals joining the family as Hallmark Channel is developing the talents of many shelter pets to star in upcoming original projects. The network’s family of pet celebrities is an expansion of Hallmark Channel’s evergreen pro-social initiative “Pet Project,” which is devoted to celebrating pets and raising awareness of the plight of shelter animals across the country.

“Rescuing ‘Happy’ is the quintessential representation and extension of our brand, which is about celebrating life’s special moments with family and friends, sharing love, happiness and the joy a family pet brings,” said Bill Abbott, President & CEO, Crown Media Family Networks.

“‘Happy’ reminds us that with shelter pets it’s not about pedigree, it’s about family, and in addition to loving and caring for ‘Happy,’ we look forward to utilizing the cat as an ambassador and star-in-the-making to show the world what incredibly beautiful animals are available at your local shelter,” Abbott concluded.

Hallmark Channel adopted and will train “Happy” in partnership with Sarah Clifford, one of the finest and top animal trainers in entertainment. Clifford will prepare and work closely with “Happy” to ensure its safety and well-being for the cat’s on-screen debut, public appearances, starring roles and “Kitten Bowl II” games!

“Happy” is the first of many furry co-stars to be announced that have been found at local and national animal shelters across the country. The pets will be housed, loved, trained and cared for by the network, in partnership with Clifford, and will star in various upcoming Original movies, series and specials. Both Hallmark Channel and Hallmark Movies & Mysteries have featured animals in numerous original movies. Upcoming films in which pets are featured include “My Boyfriends’ Dogs,” “The Christmas Shepherd,” “The Nine Lives of Christmas,” “Debbie Macomber’s Mr. Miracle” and “Signed, Sealed, Delivered For Christmas.”

Hallmark Channel, owned and operated by Crown Media Holdings, Inc., is a 24-hour basic cable network that provides a diverse slate of high-quality entertainment programming available in high definition (HD) and standard definition (SD) to a national audience of 86 million subscribers. Hallmark Channel is the nation’s leading destination for quality family programming with an ambitious slate of TV movies; original scripted series, including Cedar Cove, When Calls the Heart, and Signed, Sealed, Delivered; specials such as Kitten Bowl; as well as some of television’s most beloved sitcoms and series, including The Golden Girls, The Waltons, Little House on the Prairie, and Frasier. The channel is also home to Daytime Emmy-nominated lifestyle program, Home & Family, a daily two-hour live show shot in a fully functional house located on the Universal Studios lot. Hallmark Channel's sibling network, Hallmark Movie Channel, available in HD and SD, focuses on family-friendly movies with a mix of original films, classic theatrical releases, and presentations from the acclaimed Hallmark Hall of Fame
Hallmark Kitten Bowl Super Bowl