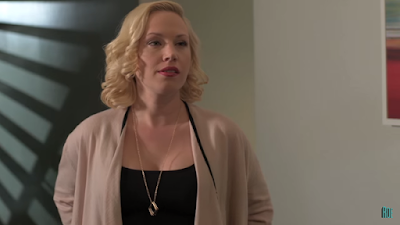 Lifetime movie The Perfect Girlfriend premieres Thursday, August 13. The film stars Adrienne Frantz (The Bold and the Beautiful, The Young and the Restless), Jon Cor (Shadowhunters) and Ashley Leggat (Life with Derek).

When Brandon Moore (Cor) takes a promotion 3000 miles away, he leaves his girlfriend Jensyn Bannet (Leggat) of five months in New York City, but promises to do everything he can to make their long distance relationship work. This becomes harder than Brandon could have ever imagined when his new boss, Simone Matthews (Frantz), takes him under her wing with hopes of becoming his girlfriend. Simone impersonates Jensyn, taking over her rival's identity, and attempts to destroy their relationship so she can have Brandon all to herself.

From Reel One Entertainment, The Perfect Girlfriend was directed by Curtis Crawford, and written by Christine Conradt.