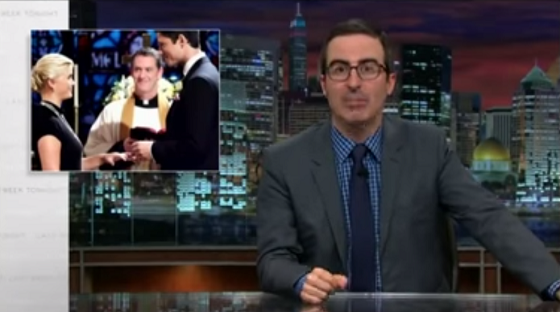 ABC News recently profiled 16-year-old refugee Nageen Mustafa, who traveled from her home in the war-torn Syrian town of Kobani to the Serbian border with Hungary. Bound to a wheel chair, the obstacles she has faced are unimaginable, and yet she is endlessly optimistic.

Her English is impeccable for a teenager who has never seen the inside of a classroom and who spent most of her childhood indoors, in a culture where she told us she was shunned for her disability. How did she learn to speak English so well? “At home with my favorite TV show, Days of our Lives,” she said, beaming. "I watched it for two years. I was waking up at 8 a.m. some days to watch it. That’s a great show. But they killed the main character that I loved!”

On Sunday's episode of Last Week Tonight on HBO, host John Oliver had a surprise for 16-year old Syrian refugee Nageen Mustafa. Mustafa told ABC she sad that the character of EJ DiMera (James Scott) had been killed off Days because EJ and Sami Brady (Alison Sweeney) were her favorite couple. To brighten Mustafa's day, Oliver reunited EJ and Sami in a special scene created just for the show.

"She loves Days of our Lives," Oliver explained. "Specifically, she loves EJ and Sami. Even after weeks of total hell, mortal danger and inhumane treatment, Nageen's biggest complaint is that the show actually killed off EJ, who was her favorite character. And, frankly, she's right to be upset. EJ and Sami were magic together. Yes, you could argue that EJ basically blackmailed Sami into marriage and then impregnanted her and then worked for Sami's arch nemesis, Nicole Walker, who he then also impregnated, and then he kidnapped Sami's baby and made her think it was dead so Sami shot him in the head, but you know what, that's the the kind of thing couples do."

Oliver then introduced the Sami and EJ reunion, in which EJ was alive and well and reunited with his true love. Watch the "Migrants and Refugees" segment below: