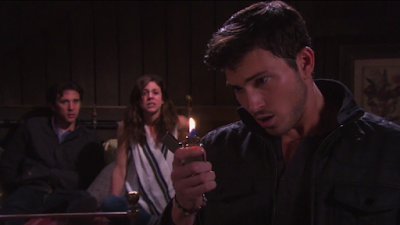 Days of our Lives is on fire baby, and so are poor Chad (Billy Flynn) and Abby (Kate Mansi) based on the show's just released 50th anniversary promo! It appears that Brawny Ben (Robert Scott Wilson) ties supercouple Chabby to a bed that he pours gasoline on in order to let them die together in a blaze of glory! Maybe Ben ships them too?

In other shockers, Days teases Bo Brady's (Peter Reckell) terminal brain cancer; the return of Belle Black (Martha Madison), who is getting divorced from Shawn (Jason Cook); Steve (Stephen Nichols) and Kayla (Mary Beth Evans) Johnson sharing a kiss, while their son, Joey (James Lastovic) talks with the newly returned Ava Vitali (Tamara Braun), whose plan is apparently working; Sami Brady (Alison Sweeney) may have "defeated the DiMeras at their own game"; and Victor Kiriakis (John Aniston) tells his grandson, Brady (Eric Martsolf) to choose between Theresa Donovan (Jen Lilley) and his family.

Watch the fab new promo below: