on January 10, 2017
'Philly' Fans Get What They Want On 'The Young and the Restless'
By Mark Harding 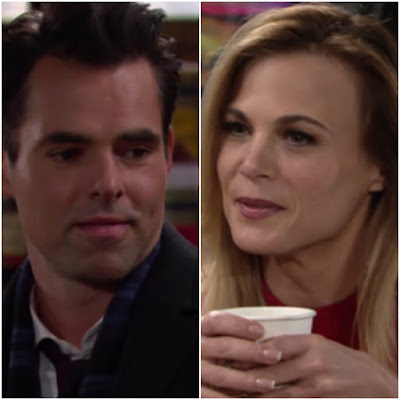 While critical and fan reception of new Y&R headwriter Sally Sussman has been generally positive, some fan groups have had concerns.

Perhaps most vociferous were fans of the erstwhile Phyllis/Billy union, who felt their couple was being tossed aside without regard for fans’ investment in the pairing. An early interview between Sussman and TV Guide’s Michael Logan fueled these concerns.

The January 9, 2017 episode of Y&R should put those fears to rest. Billy and Phyllis had an encounter at Crimson Lights. Billy bought Phyllis “1,000 calories” (to quote her), and they both talked about moving on. But the chemistry between them was still palpable.

It appears Y&R writers are again taking a page from the Bill Bell playbook. In the 80s and 90s, Victor and Nikki spent most of their time apart. But they frequently shared scenes. Victor married Ashley, Leanna, and Diane Jenkins, while Nikki married Jack and Joshua Landers, but Victor and Nikki constantly kept fighting, yearning, co-parenting, and keeping their connection alive. This kept the Victor and Nikki fans craving that their couple would reconnect, while building years of drama from their estrangement.

Phyllis has “moved on”, Victoria remains sensibly guarded. But suddenly the story is alive with possibilities. Billy could feasibly end up, in the long term, with either lady or someone entirely different. Nothing seems foreordained, and that keeps things interesting.

This is another positive sign that the current Y&R regime understands how to make good soap opera. What are your thoughts?  Sound off below.

The Young and the Restless airs weekdays on CBS.