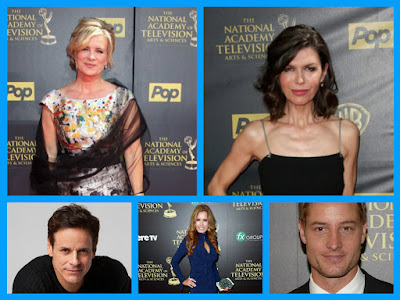 I never (at least rarely) shy away from a challenge. The task at hand — select my top five choices among all the acting nominees for the 2016 Daytime Emmys. I was completely overwhelmed by this daunting decision, so I offered a compromise. Despite the quality performances by all the nominated actors, I will put myself out on a limb, and narrow the list down to my top five in the combined categories of Outstanding Lead Actor and Actress.

Since I am not privy to the actual submission, I am basing my selections on the stars’ 2015 performances.


Without further delay, here are my top five in no particular order:

Mary Beth Evans (Kayla Brady/Days of our Lives) - While I was not immune to cheering for the long-awaited reunion of Kayla Brady and Steve Johnson (Stephen Nichols), I was far more deeply moved by the reunion of Kayla with her brother, Bo (Peter Reckell). The thrill of seeing Bo alive was beautiful, as was the ease with which the pair fell into their roles as loving siblings. However, what put Mary Beth in a top spot, was the depth of emotion she believably displayed when Dr. Kayla Brady diagnosed, and then delivered the news of Bo’s fatal condition to her beloved brother. The scenes between Kayla and Bo significantly diminished my tissue supply — not something easily accomplished in daytime TV.

Justin Hartley (Adam Newman/The Young and the Restless) - I was at the front of the line, experiencing extreme skepticism regarding the recast of Adam Newman — that is, until I watched Justin Hartley take ownership of the role. Justin found a way to, not only demonstrate Adam’s ruthless, revenge-driven character, but to temper it with just the right amount of vulnerability. It was far easier than expected to wish Adam success as he fought to regain all he lost due to his near death experience. Justin portrays Adam’s ongoing struggle for balance between his personal life and desire to gain recognition from his father seamlessly. It’s a never ending walk on the precipice for Adam Newman. Thanks to the nuanced, and moving, portrayal by Justin Hartley, the viewer can not possibly predict which way Adam Newman will fall.

Finola Hughes (Anna Devane/General Hospital) - There appears to be only one actress on daytime TV today who can take her character from hardened adventurer to tenderest of grandmothers. Finola Hughes is that woman. Finola's portrayal of Anna Devane demonstrates the complicated life this character has, does, and will continue to lead. I felt the depth of Anna’s pain as she said goodbye to her beloved Duke (Ian Buchanan) and cheered as Anna took her uncharacteristic revenge against the man who murdered him. Finola Hughes portrays the multilayered character Anna, with all her flaws, passions, determination, and warmth perfectly.

Christian LeBlanc (Michael Baldwin/The Young and the Restless) - Over the years, Christian LeBlanc has taken Michael Baldwin from the darkest criminal places to levels of hurt, betrayal, heroism, and loyalty throughout the years but I felt his recent cancer storyline brought him to an entirely new, and challenging place. Unlike many typical cancer stories, Michael doesn’t strive for renewed health and recovery. Instead, when a seemingly innocent doctor’s visit, spurred on by the need for a libido-booster, reveals there may be more to Michael’s condition than can be rectified by popping a Viagra, Michael finds every excuse to avoid learning the truth. Once diagnosed with cancer, the newly self-deprecating, insecure character, attempts to keep his condition a secret. Christian portrays Michael’s choice to push his wife into the arms of another man, rather than face the challenge of battling cancer head on, believably. This could easily have come off as a melodramatic, over-indulgent storyline, but Christian LeBlanc opens the door for viewers to feel, and empathize with, Michael’s inner turmoil as he faces his options in the frightening, dark tunnel of cancer.

Tracey E. Bregman (Lauren Fenmore/The Young and the Restless) - This leads to my final selection. As Michael’s uninformed and confused wife, Lauren Fenmore, Tracey Bregman plausibly demonstrates Lauren’s uncertainty and dismay concerning her husband, Michael’s apathetic and unfamiliar behavior toward her. Misinterpreting her husband’s ongoing rejections, Lauren finds herself being pushed toward the brink of infidelity in an uncomfortable and awkward series of scenarios in which she can not conceive of her husband’s motivation. In addition, we feel Lauren’s pain upon learning Michael has been keeping his cancer diagnosis from her, choosing death and/or divorce rather than facing the possibility of a life of complete dependence. A story that could have become indulgent and overplayed was handled with just the right balance of uncertainty, anger, fear, and ultimately love.

Not one to give up easily, there will be a follow-up piece revealing my top five selections in the categories of Outstanding Supporting Actor and Actress.  Stay Tuned!
Carolyn LeVine Topol Christian LeBlanc Daytime Emmys Finola Hughes Justin Hartley Mary Beth Evans Tracey Bregman