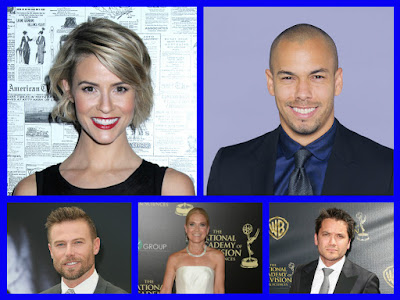 Approaching the challenge to select my top five choices for Outstanding Supporting Actor and/or Actress was equally as daunting as the task of selecting five from the Outstanding Actor & Actress categories. However, this task was multiplied in difficulty as, having watched all four network TV soaps during the past year, I felt some actors were glaringly snubbed in the Supporting Actor/Actress categories. While it is hard to block out a performers entire body of work, and keep focused solely on the submission reels, I can only assume this is what occurred during this year’s nominee selection process.

Although I would have liked to have seen more actors and actresses nominated, each of the nominees had exciting and dramatic storylines during 2015. Since I have not been privileged to see the reels sent in by each actor, I am basing my selections on overall storylines and performances from 2015.

Without further delay, here are my selections in no particular order:

Linsey Godfrey (Caroline Spencer/Bold and the Beautiful) - Linsey’s actions and reactions from the moment Caroline confirmed she was pregnant to the moment she learned her husband, Ridge Forrester (Thorsten Kaye), had a vasectomy were priceless. We watched her go from pure joy to abject horror and were drawn into every step of Caroline’s emotional quagmire. Linsey demonstrated Caroline’s inner turmoil perfectly. We felt Caroline’s pain as she hesitantly agreed to keep the truth of her child’s paternity from his biological father, Thomas (Pierson Fodé).

Bryton James (Devon Hamilton/Young and the Restless) - Devon Hamilton’s guilt, as he fell deeper and deeper in love with his father, Neil’s wife, Hilary (Kristoff St. John and Mishael Morgan), was palpable. Once the truth came out, Devon’s raw emotions bubbled over as he watched Neil spiral into an abyss of anger and liquor, reacting to his son’s betrayal. But the crowning jewel for this selection was watching in stages as Devon panicked, allowing his fear to build when his new bride seemingly disappeared during their honeymoon. Bryton’s emotional range is evident and viewers were easily drawn in by his need to support all those he loves, despite knowing he is responsible for the apparent destruction of his family.

Jacob Young (Rick Forrester/Bold and the Beautiful) - Jacob Young spent much of 2015 portraying Rick Forrester’s roller coaster of a storyline. Rick took the viewers on his frightening journey of vengeance as he morphed into the angry, ruthless CEO of Forrester Creations — a result of his extreme reaction to his wife’s betrayal. However, rather than remain a one-note, evil character, Rick was able to find his way back to humanity when his love, Maya Avant (Karla Mosley), was revealed to be transgender. Rather than running the other way out of a sense of fear or ignorance, Rick got down on one knee and proposed. This dramatic arc was carried off seamlessly by Jacob Young, redeeming Rick in the eyes of Bold fans.

Melissa Reeves (Jennifer Horton/Days of our Lives) - I felt that the outstanding talent of Melissa Reeves was considerably underutilized during much of 2015. It was a thrill to see her step it up— in a big way — upon discovering the regrettable affair between her son, JJ, and her long-time arch enemy, Eve Donovan (Casey Moss and Kassie DePaiva). Horrified by her discovery, Jennifer, literally, threw herself into a physical altercation with Eve — a scene worthy of multiple views. I hope this scene was included in Melissa’s submission reel. In addition, we were afforded the opportunity to watch sweet Jennifer Horton use her knowledge of the affair to blackmail Eve. Seeing this side of Jennifer play out believably was a pleasure. As a fan, it was great fun watching Jennifer gain the upper hand in the long-standing battle between her and Eve.

Dominic Zamprogna (Dante Falconeri/General Hospital) - Dante is normally the grounded, good-intentioned do-gooder in Port Charles. However, during 2015, viewers saw him take a turn toward the dark side. Dominic portrayed Dante’s initial attraction to newcomer in town, Valerie Spencer (Brytni Sarpy), with just the right amount of subtlety. Yet, when given the opportunity to jump to inaccurate conclusions regarding his wife, Lulu’s (Emme Rylan) suspected extracurricular activities, Dante let his imagination get the better of him. With parents, Olivia Falconeri and Sonny Corinthos (Lisa Locicero and Maurice Benard), it’s no wonder Dante would take a turn toward the dramatic at some point. Dominic took Dante from picture-perfect cop, to a much darker side of his character — and it worked.

Who are your top 5 choices?  Would love to hear your thoughts.