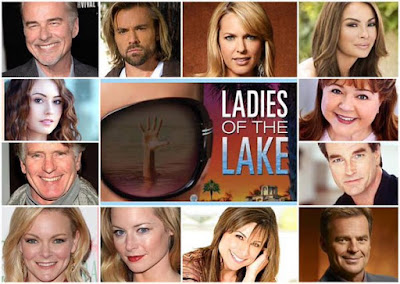 Emmy nominated Executive Producer Michael Caruso announced today the esteemed cast which he, alongside Co-Executive Producer and Emmy nominated star, Kyle Lowder, handpicked to bring the script to life. Ladies of the Lake tells the story of four wealthy wives living in the exclusive gated community of Avalon. When their abusive husbands begin to turn up dead, Detective Shawn Daniels (Lowder) launches an investigation, only to discover the many secrets hidden beneath the glossy veneers of Avalon. The script was penned by Caruso, adapted from a novel written by Ken Corday and is being produced through Michael & Barbara Caruso Productions.

Portraying the four mysterious ladies are Emmy nominee Martha Madison, in the role of Vivian Montgomery, an intellectual business woman who gave up her career to support her husband, Emmy winner Lilly Melgar as Angelica Louis, the quintessential Hollywood Wife with a tragic past, Marie Wilson as Morgan Firestone, a former pageant queen who became the face of her husband's shipping empire and Jessica Morris who portrays Crystal Amhurst, a barren trophy wife who will do anything to keep her husbands attention.

The talented female leads will be joined by a distinguished group of thesps playing their ill-fated husbands including Emmy winners Wally Kurth, in the role of Hudson Montgomery, a tech giant with a wandering eye and Ian Buchanan as Alphonse Louis, a B List movie star who will stop at nothing to land the next part. Golden Globe nominee Gordon Thomson will be seen as Sheraton Firestone, a shipping magnate whose ruthlessness is unwavering cements when protecting his business empire, and John-Paul Lavoisier will be portraying Jonathan Amhurst, the trust fund millionaire with an inexhaustible sexual appetite.

Three-time Emmy nominee Arianne Zucker is set to star as Clara, an investigative journalist hell bent on revenge with hidden ties to Hudson Montgomery, while Jillian Clare is playing Cassidy Montgomery, the Queen Bee of the Ladies of the Lake children.

Also joining the illustrious cast is Emmy nominee Patrika Darbo as Dorothy Nolan, a woman with a sordid past hiding behind the resident golf pro and soap veteran John Callahan as Tommy Nolan, her Avalon Golf Pro husband whose get rich quick schemes are finally catching up to him.