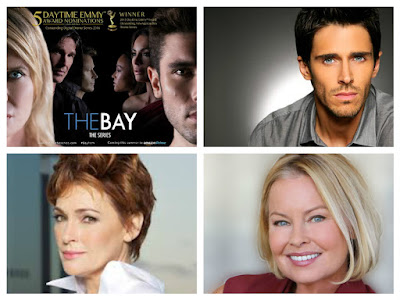 Hot off the heels of winning two Indie Series Awards last week and receiving five nominations for the upcoming Daytime Emmy Awards, LANY Entertainment has revealed its hit web series The Bay will be moving to Amazon Prime this summer. With a new beginning, viewers will be able to binge watch the “Director’s Cut” of the Emmy award-winning series, to be re-released in two 14-episode seasons on Amazon Prime.

“We’re excited to bring to the viewers these remastered episodes with never before seen footage,” explains creator Gregori J. Martin. “The show will have a new starting point, and we hope the viewers will binge watch the series to learn the whole story.”

With plans to shoot the 2nd half of the latter season, The Bay goes into production on six brand new episodes in May.

In the vein of Dicken’s “A Christmas Carol,” Mayor Jack Madison (Nicolas Coster) will be taken on a journey where he’ll reluctantly face his past transgressions.

Joining the cast in the role of the mayor’s ex-wife and son John Blackwell’s (Ronn Moss) late mother is Carolyn Hennesy (General Hospital, True Blood, Revenge). Brandon Beemer (Days of our Lives) will fill the role of a younger John Blackwell as Jensen Buchanan (The Young and the Restless, Another World) undertakes the role of Melody Garrett circa 1986. Marissa Tait (The Bold and the Beautiful) joins the cast as Young Katherine Blackwell while Eric Martsolf and Abby Wathen return in their roles as Young Lee and Young Sara.

Additional casting news will be released prior to production.