'Days of our Lives' May 3 Sneak Peek: Kate and Nicole Face Off Over Helena! 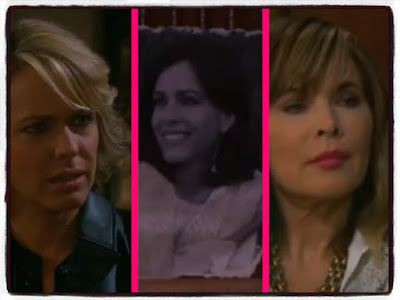 Tomorrow on the May 3, 2016 episode of Days of our Lives, Kate (Lauren Koslow) faces off with Nicole (Arianne Zucker) after she finds out Nicole looks exactly like Helena. If I were Kate, I would let her know Eric is in prison. It may take her mind off of Deimos (Vincent Irizarry)!

Elsewhere, Maggie (Suzanne Rogers) talks to Caroline (Peggy McCay) and Julie (Susan Hayes) about being poisoned by Deimos. I can only hope Julie and Caroline don't nod off during this conversation.

Later, Caroline confides in Victor (John Aniston) that her visions have stopped. I guess she saw that one coming.