'Days of our Lives' Preview: How did Aiden Survive? 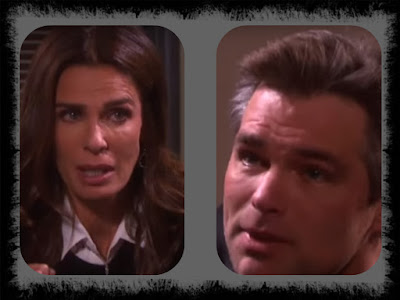 This week on Days of our Lives, Hope (Kristian Alfonso) is stunned when she sees her presumed dead husband, Aiden Jennings (Daniel Cosgrove). How did Aiden survive?

Daniel Cosgrove tells Soap Opera Digest, "He has a lot of explaining to do and he wants an opportunity to do that. He's taken to the police station and doesn't want to talk to anybody but Hope. Aiden wants to connect with Hope as soon as he can and explain everything. She saw Aiden zipped up and put into a body bag, so he understands that there is a lot of craziness associated with his return."

The May 9 episode of DAYS, focuses solely on what happened the night Bo (Peter Reckell) supposedly killed Aiden. Aiden recalls that on his wedding night, he couldn't go through with killing Hope. When Aiden tried to leave Hope's house, he came face to face with his double. As Aiden tried to process what was happening, Andre DiMera (Thaao Penghlis) arrived on the scene and ordered the impostor to murder Hope. Aiden was knocked out and later awakened to find himself in a cage.

At the police station, Aiden gets a chance tell his story to Hope. Aiden insists that it was an impostor who tried to murder her while he was held captive in a cell by Stefano and Andre. Aiden also reveals that prior to being kidnapped, he had been secretly working with Stefano.

"Aiden wants to come clean with Hope and be completely honest," says Cosgrove. "He tries to clarify anything that confuses Hope. Aiden's biggest wish is that he wakes up from this nightmare and gets back to where he was with Hope."

However, it may not be that easy. Hope still believes he is an impostor, and things get even stranger. Roman (Josh Taylor) and Rafe (Galen Gering) are told that Aiden's fingerprints have vanished from the file and therefore cannot be compared to the man claiming to be Aiden.

You can watch a sneak peek video below: