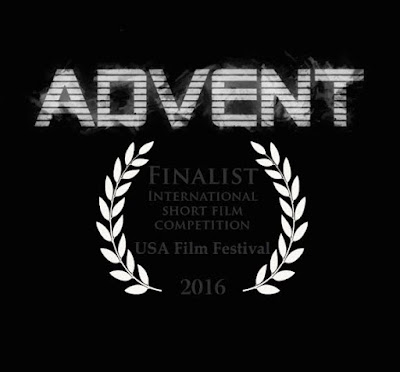 Advent tells the story of a young priest, portrayed by Brett DelBuono (Let Me In), who finds himself in danger when he goes too far in his search for heaven and hell. The sci-fi short also stars Clare and Brian Beacock, who delivers a chilling performance as the the Archbishop. Clare and Beacock can also currently be seen in the semi-dark comedy, Acting Dead, which recently released on http://actingdead.com.

“I'm so incredibly proud of our entire cast and crew!” Clare said. “It's an amazing first achievement – I can't wait to see where Advent goes from here!” Director Colby Mann added “This is our first victorious step in what I know will be a long staircase of success!”

The film was produced under the umbrella of Clare's newly formed production company, Whimsical Entertainment, in partnership with Colby Mann. This is the first in a slate of projects Clare has lined up to produce including several features.