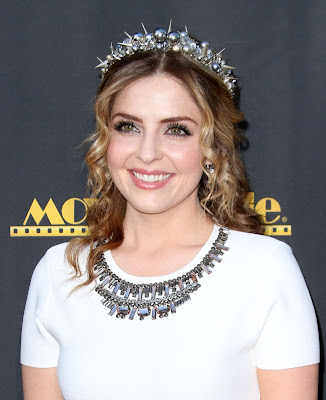 Daytime Confidential broke the news that popular Kirsten Storms has requested a leave from General Hospital, and is being replaced in the role of Maxie Jones by former Days of our Lives actress Molly Burnett.

This isn't the first time Storms has taken a leave of absence from General Hospital. In 2011, Storms was replaced by current Days of our Lives actress Jen Lilley. What was that experience like for Lilley?

In August of 2014, Lilley spoke to Serial Scoop and gave us the dirt. Hopefully Burnett knows what she is in for!

SERIAL SCOOP: How challenging was the General Hospital experience replacing Kirsten Storms as Maxie?
JEN LILLEY: It was incredibly challenging. It was super awkward and I tried to navigate that whole situation with as much class and respect as I could because I really knew who Kirsten Storms was. I didn’t know that I was Maxie until I was cast. They changed the names and they didn't say this [casting] was for Maxie at all. As soon as they told me who I was playing it was like, "Oh my god, I grew up watching Zenon on the Disney Channel." She was one of the soap stars who I really knew who she was and it was incredibly challenging and hard because I wanted to be sensitive to the fans. I've said this a million times and I'll say it again, Dexter is my favorite series and it's off the air right now, but Michael C. Hall is a phenomenal actor who plays Dexter. Well, lets say Dustin Hoffman came in and played him. I love Dustin Hoffman, he's an incredible actor, and I couldn't say a bad thing about his work. But if he came in and tried to play Dexter all of a sudden I would be pissed and livid because he's not Dexter. So I tried to empathize with the audience but it was incredibly difficult.

My only saving grace with the whole situation from the get go was that they put me in these crazy high heels that I was not used to walking in, and the audience said they walk the same. The truth is, Michael, there is only one way to walk in nine inch heels, so of course we walked the same way. [Laughs] I respect Kirsten a lot and I think her work is really solid so I’m really excited to basically originate a role. I know toddlers played Jeannie but it's really nice to be able to create something as your own and put your own spin on it.

With Maxie, I got cast and started the next morning. I had forty pages my first day. Jill Farren Phelps sat me in her office and did the whole spiel about how people are always nervous going on soaps and I've taken that note to heart. Every time we have like a new character, one just started on Days, I lead him around. Here's the commissary, here's the this, and he's like, "Who are you? Why are you so nice to me?" And I said because no one ever did this for me and I wish somebody had. It's hard to be like the new kid. When I started [at General Hospital] Jill said, "Look, every actor going into soaps basically, excuse my language, wants to shit a brick." I'm going to do how many pages in how much time and we have basically one take and we don’t have marks on the floor to tell us where to land but if we land in the wrong spot the focus is off, and we screw everything up. The camera and everything is ruined if we do it wrong. She was like, "Everybody is nervous." But then she leans over at the end and she goes, "I don’t mean to put more pressure on you, but this is the most important time of the history of the show. We're facing cancellation because the other soaps are folding. This is the most crucial time in the character's life." She reaches over, put her hand on my knee and goes, "I really need you to pull this off." [Laughs]

And it was awful, you know what I mean, it was awful, like I didn't have an option to back down, so I kind of just had to rise to the challenge. There was no other option. Kimberly McCullough was so sweet because she said to me, "None of us knew that you hadn't done a soap after your first day. We were all shocked." But I was freaking out, and shaking. but I just went up and thought this is it, sink or swim, so I didn't have an opportunity to really freak out. There was literally no time for me to even be excited that I had got it. They kept asking me that too, "Are you excited?" And I was like, "Yeah, but no emotion is allowed right now." Business is business, you tell me what you need me to do and where you need me to stand, and we're going to do this. Later I'’ll probably do a happy dance in my car once I realize this isn't a crazy dream. I'm still wondering if it's a dream.

Honestly, are we really having this conversation? It's been a crazy three year dream. I’m loving Days. I will never change my experience on General Hospital because I feel like there's nothing more challenging in my career that I will ever face than that. And I respect the fans and I don’t blame them for being up in arms for awhile but they came around in a major way. I appreciate that because we all know that soap fans are so loyal and I respect the hell out of them for giving me hell in the beginning. If they had done anything otherwise you know it wouldn't be worth where I am now.

SERIAL SCOOP: You've created your own character and at this point. I couldn't imagine anyone else as Theresa. This is your role. And you made Maxie your own character too.
JEN LILLEY: Jill told me you need to play it just like Kirsten for the first couple of weeks, and then it turned into months. It was about my three and a half month mark when she was like now you can make the role your own. They literally talked me through it. When the time comes that I move on and do sitcoms and stuff again, should that day come, I will give hell right back to my fans if they are mean to my recast as much as I want them to be loyal to me. [Laughs] It's so hard being a recast, that's why I have a heart for Guy Wilson [who replaced Chandler Massey as Will Horton on Days]. Who is going to fill Chandler's shoes? They're screwed. Chandler Massey is a machine and he's untouchable, you know. [Laughs]