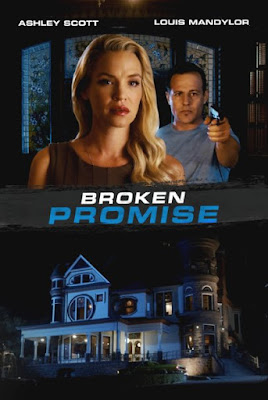 High school couple Mina (Scott) and Reese (Mandylor) break into a mansion for a night of rebellion, but their evening takes a dark turn when the mansion’s owner appears with a gun, and ends up accidentally killed at the hands of the teens.

Twenty years later, Mina lives a perfect suburban life with her husband and teen daughter, while Reese, who took the fall for the crime, has spent the past two decades in a state penitentiary. Now he is up for parole, and upon release, goes straight to find Mina ready to make up for lost time and have the perfect family he thinks is rightfully his - unfortunately she has moved on.

Broken Promise was written by Steven Palmer Peterson and directed by Nadeem Soumah.