on June 03, 2016
Daytime Confidential first reported the news that Jen Lilley had elected to leave her role of Theresa Donovan on Days of our Lives, and now Lilley's co-star Meredith Scott Lynn (Anne) has confirmed the news.

In a since deleted post from her facebook page, the actress reveals that Lilley has indeed filmed her last episode.

Meredith Scott Lynn wrote, "Everyone at Days of our Lives will miss the incomparable Jen lilley who filmed her last episode, for now I hope, last week."

She went on to say, "At first, Anne will be sad- lost- without her best friend & partner in crime...but I'm thinking Anne will stay in Salem and choose booze n 'boys over tears n 'Teresa." 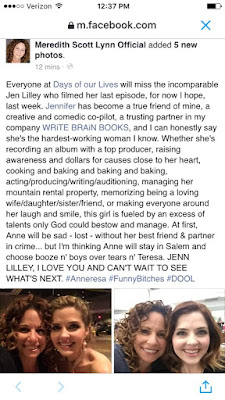