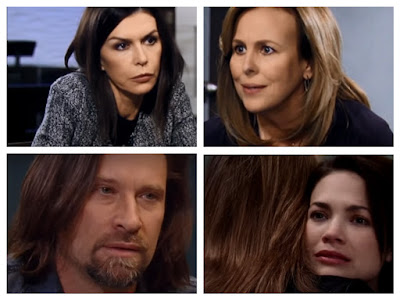 Michael Fairman recently sat down with General Hospital head writers, Shelly Altman and Jean Passanante, and executive producer, Frank Valentini, to talk about the major events that took place on the show during 2016. Below, are their thoughts on some of what they thought worked the best during the last year.

Passanante on James Patrick Stuart as Valentin, "He is such a wonderful actor, and he gives us everything. You know he is a bad guy, but boy can he be charming and loving!"

Altman on Finola Hughes, "We want to see Anna Devane being the strong woman she has always been in the past. We love Finola. She is an important element on the show for many people. Increasing her relationships with the addition of Griffin (Matt Cohen), and the occasional return of Robin as often as we can have her, we felt was re-grounding her in Port Charles society. We admire strong women in the world, in our lives, and on our show. So it’s fun to invent situations for Anna to be in."

Passanante on pairing Laura and Kevin, "For one thing, we love Jon Lindstrom. He is a wonderful actor. We didn’t want to bring in a completely new, unknown, and un-beloved character to the audience. It’s always a risk when bringing in someone and going, “Here’s so and so, and they will be the love interest…” It just seemed right for it to be Kevin for Laura, and it sort of just evolved."

Passanante on pairing Franco and Elizabeth, "We did have a conversation about how Liz just had come off of a relationship with Jason (formerly known as “Jake”), and we have the fan bases of Liz and Jason, and Sam and Jason. The Sam and Jason pairing though seemed inevitable to us in a lot of ways, but Liz is a very worthy character. Her relationship with Jason was a very worthy relationship, too, until she started lying to him, but that’s another story. We wanted someone to fall madly in love with Liz, and who needed her in some way, and we wanted to take Franco in a new direction."

Passanante on bringing Tom Baker back, "We brought Tom back, because we wanted to play off some of Liz’s history, and her evolution, and put Franco in a position to come to grips with who he really is. In some ways, Tom is/was a mirror of that. I think the rest of the story will become clear as it goes along."

Altman on what she is most proud of in 2016, "I think overall what I am proud we accomplished is that I think we made “General Hospital” a real center of the show again, which was a goal, and one we continue to work on, and one we continue to hold important. In all the stories we mentioned; the Morgan story, Hayden/Finn, Sam/Jason, the Nurses’ Ball, the hospital itself is almost like a character. We want to honor that character, and I hope we have."

For more on their thoughts about Morgan's death, the introduction of Michael Easton as Finn, Chloe Lanier as Nelle, and what's next for Alexis and Julian, click  here.