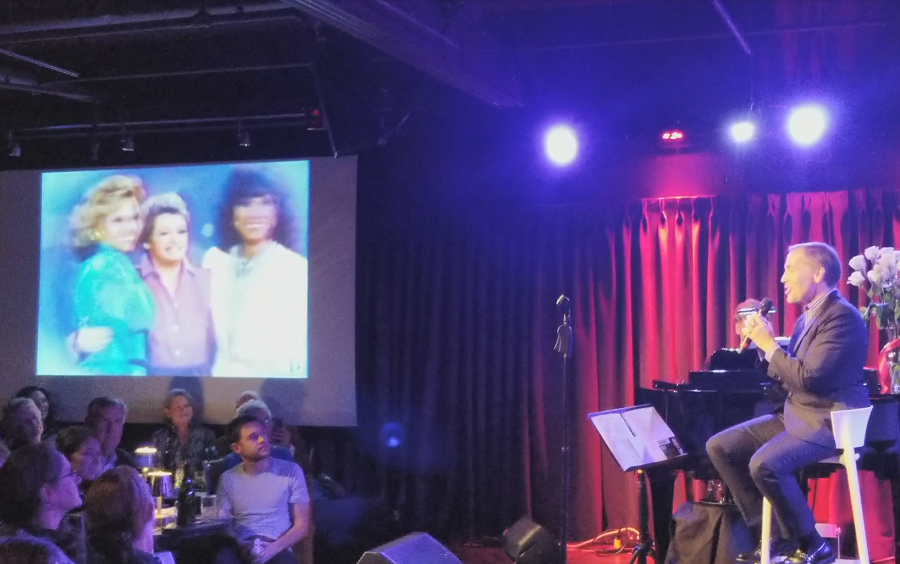 On October 4, I arrived at The Green Room 42 for international entertainment reporter and entertainer Nelson Aspen's sold out debut performance of "A Showbiz Scrapbook." Having seen Nelson multiple times in recent years, I knew he always packed the house so there was no excuse for not buying a ticket before they were all gone but I somehow still managed to end up on the wait list. After being rejected by the ticket booth a few times I made one last attempt to beg my way into the show and secured a bar stool by the door. Lucky for me there are no bad seats in this terrific venue, which I had never visited before. As for the premiere of Nelson's latest show, it was everything I had hoped for and more.

One big new addition for "Showbiz Scrapbook" was the use of audio-visual clips and images to highlight Nelson's prolific television work. During the course of the evening, Nelson recounted everything from how being Princess Diana's fitness trainer launched his broadcasting career to the thousands of celebrity interviews, breaking news stories and red carpet events that led to him becoming known as "Hollywood's Happiest Personality."

But since my favorite television show of all-time was the daytime soap opera Another World, I was over the moon when Nelson sang the show's beloved theme song. Check out the iconic chorus below.

If you are looking for a fun musical evening with wonderful songs, interesting stories, funny moments and a great crowd, head to a Nelson Aspen show near you. "A Showbiz Scrapbook" takes the experience to another level so if you're in the Los Angeles area don't miss his upcoming January 30th performance. You can buy tickets here.