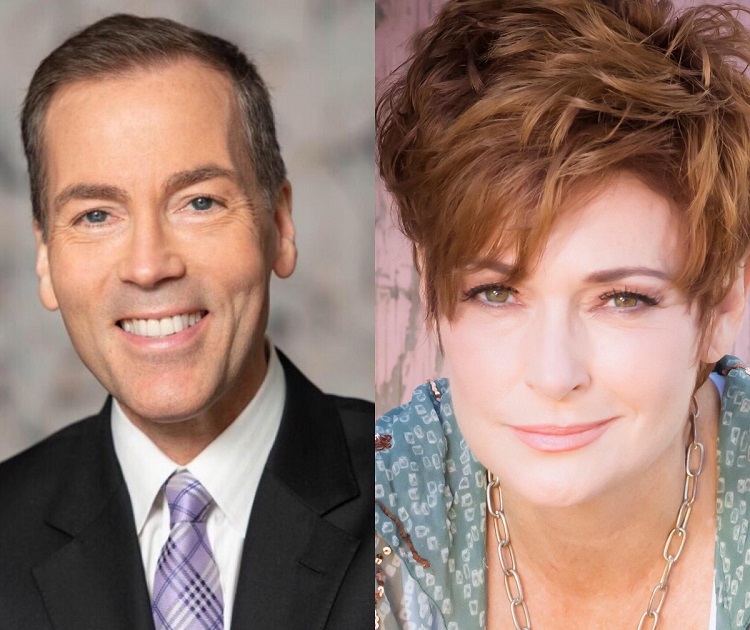 Hi, Serial Scoop! You guys gave me such kind coverage after the October premiere of my new cabaret offering, "A Showbiz Scrapbook" at NYC's beautiful GreenRoom 42, I wanted to alert you to its upcoming engagement at Hollywood's crazy-popular theatrical venue, Rockwell Table & Stage. As an entertainment reporter, I spend a lot of time in LA during Awards season, so I was keen to schedule this performance for Thursday, January 30...right in between my coverage of the Grammys and the Oscars.

As many of you may already know, given my own long history in daytime TV, I often welcome stars of the genre to join me onstage for special interactive performances. These have included talented folks like Anita Gillette, Shelly Burch, Ilene Kristen and Monica Horan. For January, I'm excited to tell you it will be one of my very favorite soap opera scene stealers: the lovely Emmy and Indie Series Award winning Carolyn Hennesy....known to millions of General Hospital fans as lawyer Diane Miller. I first noticed Carolyn guest starring on an episode of Reba and was smitten. She's one of the main reasons GH is on my DVR! I've gotten to learn so much about her life away from Port Charles: she's a New York Times best-selling author, passionate advocate for animals, and a trapeze artist. Now THAT is a multi-hyphenate!

From my own years in Soap Land (working at Search for Tomorrow, Another World and One Life to Live), Christmas was always a favorite time of year. It started weeks in advance for us, since we were shooting ahead...and the studio holiday parties of the 1980s were the stuff of legend! My mentor, Mary Stuart (Search for Tomorrow's Jo and Guiding Light's Meta), celebrated the season like no one I'd ever met before or since, and her influence remains forever inside me at this festive time of the year.

So in honor of the Yuletide, here's a little Q&A I had with Carolyn for you to enjoy.

What have you got planned for this holiday season?
Heading to Zurich before Christmas to see Sabrina Kern (co-star, St. Agatha) in the Swiss national musical. Then home to hibernate over the holiday with family and friends.

Do you have any regular holiday traditions?
Christmas Eve is always a toss-up; sometimes it's just me at home with all my animals, drinking hot chocolate. Christmas Day I spend with two of my best friends to eat a vegan breakfast and watch classic films (Bette Davis, Joan Crawford, Hammer horror...something really Christmassy!) Then head to my brother's for a fine day of food and stories.

Favorite holiday memory?
Decorating the tree with my parents and my brother. I was always in charge of placing the lights; maybe theeee most important job, am I right?

Are you making any New Year's Resolutions?
I usually never make resolutions, but last year I made a promise to say "yes!" to every invitation (possible). I'm such a stay-at-home; my favorite place. I did fairly well so this year I'll just bolster that one one up.

How do you suppose your GH character, Diane Miller, spends the holidays?
Max, a fire, unplugged with about a case and a half of single malt scotch. (Actually, Diane and Max serve breakfast to the homeless the entire week between Christmas and New Year's...but for heaven's sake, don't tell anyone. They'll think Diane has a soft side.)

What can we expect when you take the stage at Rockwell on January 30?
If I don't faint straightway...then blinding brilliance.

To Serial Scoop and all it's readers, I wish you the merriest of Decembers & a happy, healthy New Year....and hope you will join Carolyn Hennesy and me in Los Angeles, January 30. Seats are already selling fast, so book quickly.
Carolyn Hennesy Daytime Event General Hospital Music Nelson Aspen